155 | Autonomy In The Workplace

Autonomy In The Workplace

We all like to have freedom and independence to be creative and get things done. So as an Entrepreneur, how do you balance that in the workplace and create that great environment?

I received a killer question the other day regarding autonomy in the workplace. Here’s what Marc had to say:

“We hear a lot about what makes a great workplace and I’ve read several things recently from people that I really respect and one of the things that is often recommended for a great workplace is team members having a sense of autonomy.

We’re not asking to read a script verbatim, but feel like we need things done a certain way because these are methods that have been developed over time and have been proven to work, and will ultimately make them more successful.

With a sales team of over 30 people in two different locations, we feel the need for consistency in what’s being said and presented. I’d love to hear some examples or stories of where a company has some guidelines of having to do things a certain way, but can still give their team members that sense of autonomy to create that great work environment. Thanks.”

This is kind of a difficult one, which in leadership, what’s not difficult, right? When I think of autonomy, I think of it as being two types of things. One would be self-governing. Can you govern yourself? That’s the main concept.

When we talk about it in leadership, we’re kind of taking the self governing part away, or at least some people do to an extent in saying, it’s just freedom to work alone, which should mean the same thing, however without clear definition of autonomy, people can run with that all day long. 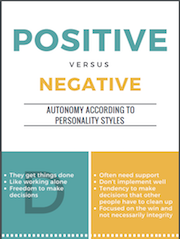 Make sure that if you don’t know your team’s personality styles that you go to the store and have them take a personality test. Get that done. You’ve got to understand that.

Do I think autonomy creates a great workplace?

I think to an extent, yes. What that extent is depends. It depends on a lot of things. What is it that the person is working on? You gave the example of a sales team. Now you have two different locations, you’ve been doing this a while. This changes things for me.

What I believe you’re asking is do they have the ability, can they self regulate or self govern themselves to sell our product the specific way?

The answer for me is mostly no. With that being said, this is going to change a little bit according to different positions. Salespeople that are reaching out from our business, representing our business.

He’s like, “Chris, I got the sale.” I’m like, “you’re going back and you’re calling that person and you’re going to tell them the truth. If they want their money back, done. We don’t do this. We’re not going to take advantage of people. We’re going to be honest in our sales.”

He went right back. He was very frustrated and a little embarrassed, but he went back and he had to tell them the truth. That client saw that as integrity and stayed with us.

They can manipulate situations, they can over-promise and then you have to under deliver. All kinds of bad things can happen there.

The balance is starting with, “we’ve done this for a long time. We know what works.”

Ask for their input. Ask what it is that they think you should do. Come together and discuss this. If you agree with them, then allow them to go and do some of it, give some of it a try, but give them parameters.

When somebody’s been doing it for a very long time, then there’s a lot of autonomy. Joel who has been selling for me not only for a long time, but is phenomenal at doing it, there are rarely things that he needs to get with me on because I’ve let out a ton of that rope.

When we’re looking at a situation like yours Marc, you’ve got multiple locations; you’ve got a team of people that have proven what works. In those situations, autonomy is not something I’m going to give a ton of.

I would tell them, “If you have a system that you think works, discuss it with me. If you can’t prove to me that it’s going to work or if you can’t tell me something that I think is going to work, you stick with what we do.” As you can see, we have two sales teams that are making money themselves. They must be doing something right so follow the program.

Again when it comes to the making sure that the message is the same, that is a must. That for me is a must. We cannot have mixed messages out there. People have to understand what it is that we are selling or what the value of it is or what we’re willing to do with it.

If the client is trying to talk to you and maybe talks to the other sales team or something like that and is confused or they talk to a friend that purchased something and they got a better deal or whatever, then this becomes an issue. Now we have a customer service issue on our hands. Making sure that the message is consistent is an absolute must. Consistency is crucial.

Now if we took another role, Savannah is working on our social media stuff. There is a huge level of autonomy there because we meet a lot. She will do stuff, research stuff, pull information, do things, come back, give me metrics, but we had to set that up. We had to set this process up and say, “okay these are the things I expect.”

I expect excellence in this. I expect reporting in this. We’re not going to spend any money that you can’t tell me what happened to it. I want to see the process. I want you to give me your input; I want you to tell me what we should be doing. I want to hear all this stuff. If you can do all of that then go.

As we let rope out very quickly. She attacked it, she’s done a phenomenal job, and so she has a lot of autonomy in her role. There are still standards, there’s still expectations, and she still has to report on all of them and she has to let us know what’s going on, how’s it working, is it not working, what do we need to tweak?

The great thing is is when you find that right balance, especially according to personality style, then what happens is you are treating the team member with dignity. When you treat the team members with dignity, you get loyalty, you get buy in, and you get ownership, which is what you want from your team.

You want your team coming in every day owning what it is that they do. You want your team loving what they do so that it’s not a J-O-B, so that they come in, they kill it, they show you how they did it. Again we’re not basing this off of hey your worth is based on your performance. It can’t be that either so make sure you’re careful on that.

Set the autonomy up according to personality styles

They’re going to need some sort of injection and they will start reaching out and doing things and sucking up time. You have to make sure that the autonomy is set correctly according to personality style; you have to make sure that it is set correctly with expectations and metrics, measurement. Show me how this is working. Show me that I should give you more autonomy.

Now some people don’t want it. Some people would rather work well in a team. This is where some negatives can happen. Some people who absolutely want to work on their own. What you’re going to find is they’re going to take things into their own hands. They will make decisions for you and ask for forgiveness later when they’ve screwed something up. You have to watch this.

I need that team to complete stuff. I need that team to make things happen. If I can get the team humming and I don’t have an island out there that doesn’t play well and is maybe a jerk or rude or whatever, I don’t need that. I need a great team because we move forward together as a team.

Everybody on my team has a level of autonomy. Some of it is great and some of it, it’s not even needed. It just kind of depends.

You can look at things like Google. You can see that all day long. They’ve got a lot of it, but they also have a lot of parameters on work hours and clock in, clock out, all that kind of fun stuff. They allow people to have a certain level of autonomy.

Let me throw my buddy Rory Vaden in there. I know his team is phenomenal, but that’s because they are phenomenal. Everybody on that team knows what their parameters are, they know what excellence looks like. This is what Rory’s really great at doing, is that he really digs in and finds out what the experience is of the person. That allows him to give some rope.

He’s putting a champion in place to do their job. On that sales team, they actually probably have more autonomy than a lot of sales teams. Again that’s because Rory is set on making sure that everybody is not only excellent, but very efficient as well.

Hopefully Marc that answers your question. Everything has got to be measured according to two main things:

That should give you a gauge of what you can get as far as autonomy in the role.

Question: Do you have an example where you let out too much rope?

How To Implement A Profit Sharing Plan

Setting Up Your Team For Success

How To Sell To Different Personality Styles And Close More Sales

How To Get More Out Of Your Team