Home » Leadership » Dang This Hurts!
a

I have a personal struggle I believe most people can relate to – sometimes I’m just an impatient person! There are plenty of times when I am able to breathe a little and wait. But sometimes, especially when I have some experience with an issue, I tend to rush the process. And it’s that rushing that gets me in trouble every time. Take for instance my latest attempt at getting in shape by running two half marathons in one month. Yes, I’m that crazy. 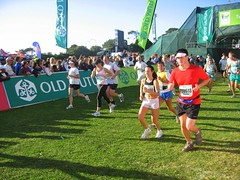 Some of you may think it’s not that crazy of an idea. What makes it crazy is that I’ve never done a half marathon before. In fact, I believe the longest I’ve ever run was a 12K, roughly 7 1/2 miles, 20 years ago. But in Classic LoCurto fashion, I figured I could just… run, and I would be ready to tackle almost twice the distance I’ve ever run before.

The problem is that my body doesn’t even remember what running looks like. When my mind told my body what we were going to do, it scoffed. “You and what 20-year younger body?” it said. But my mind won out. We were going to do this thing. And we started to run to see how well we could do. (I keep saying we, because it should be a collaborative process between mind and body… HA!)

As I ran, I began to realize that my mind didn’t really win out at all. At least, that’s what my body began to scream. It hurt like crazy! So I figured I would fix my impatience by getting on a training program. I asked around and received a walk/run plan from Chad Nikazy that would get us up to speed in 16 weeks. So what if we were already four weeks behind? We could just jump right in and make it happen!

Yeah…. that’s been another win for the body as well. But no biggie, we’ll make it work out. Oh wait, did I just commit to TWO half marathons? And the second half marathon four weeks earlier than the original event? Sweet! We can just crunch the 16-week program into an eight-week deal, right? How bad could that be?

Well, it hurts. What I’ve realized is that I did what I always do with something I believe I can conquer with my mind. I compressed my time frame and put the demand on my body. Only thing is, my body never signed up for the trip.

I did both half marathons, but there certainly was a better way to prepare. One that didn’t tax my resources. There’s a reason it’s a 16-week plan; it takes 16 weeks to get you through the process without hurting yourself.

The same happens with us as leaders. While there are many times you should compress time frames to make things happen, you should always check first to see if your resources can handle it. If so, rock it! If not, step back and re-think the process. Perhaps go a route that will get you there with all of your limbs intact.

STOP LETTING YOUR BUSINESS RUN YOU.

INSTEAD, LEARN HOW TO LEAD YOUR TEAM TO SUCCESS!

Walk through your challenges with one of our coaches for FREE and see the difference a shift in mindset can make.

DO YOU WANT THE BEST TIPS, TRICKS, AND TOOLS TO RUN YOUR BUSINESS?

Sign up for weekly curated insights and frameworks from coaches, leaders, and business owners that help you take your business to the next level.