No Trust For The Church

Home » Financial » No Trust For The Church
a

No Trust For The Church 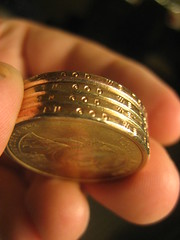 The place that we should trust the most is becoming the place that some people trust less and less. At least when it comes to the area of handling money. In this post, No Trust For The Church, a group of us were brainstorming the other day on ways to help churches get out of debt. During the meeting we were spending some time on why people don’t give when one of the guys in the group said, “people don’t trust the church with their money!” It hit me like a ton of bricks…or feathers…either way it was heavy. I’ve been working to help people with their finances for over ten years. For that same amount of time I’ve been helping churches. And while there are many reasons as to why people don’t give, (not understanding why God has them to give is what we hear more than anything) trust is definitely one of the problems. I’ve known it for years, but it took somebody saying it out loud for it to hit home.

We spend our time trying to teach people how to live on a plan. Spend money on purpose, get out of debt, save, invest, give like mad! The problem with that last one comes in when people turn to their church to see that the church isn’t doing the other things. They watch churches going deep into to debt, putting up a buildings they can’t afford, and then cutting ministry out like crazy because they don’t have the money for the debt that they’ve acquired. In Why The Church Is Broke! I talked about how there is no difference in how God wants people to handle His finances, and how He wants the church to as well.

The incredible thing that we have seen lately is, when a church starts to follow God’s plan in the area of money, the people rally behind the church like warriors! They don’t just get behind the church, they take up a sword and run into the battle. In Momentum we have testimony after testimony of churches bragging on how their people accelerated the debt payoff by giving more when the church stood up and took responsibility for doing it the wrong way.

Again, trust isn’t the number one reason people don’t give, it’s just another one. The goal needs to be removing all obstacles that are in the way of keeping people from seeing God’s will for their life.

Comment on how you feel, or have felt about the church handling money.